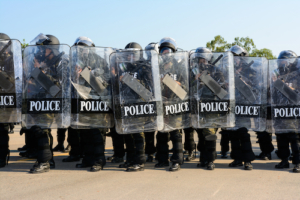 The shock and for many sadness of the recent presidential election results has led many people across the country to protest.  They believe is a President-Elect who does not stand for all people of the United States.   Recently in Los Angeles protest, hundreds of people were detained, cited and even arrested for alleged vandalism, criminal trespass, disturbing the peace, resisting arrest and/or refusing to obey a lawful order of a peace officer.  Many peaceful protester are now looking for a resisting arrest attorney. When law abiding citizens decide to exercise their right of free speech and assembly in the form of protests, any police action leading to the arrest or charges from such activity should be vigorously defended.   Many persons detained or arrested during such activity have never had any negative contact with law enforcement and should always consult with a Los Angeles resisting arrest attorney to understand their rights and defend against criminal charges which could stay on a person’s record permanently.

Sometimes protesters who don’t immediately disperse a location after being ordered so by the law enforcement may be charged with criminal trespass.  California Penal Code section 602(n) provides in pertinent part that a person is guilty of criminal trespass for: “refusing or failing to leave land, real property, or structures belonging to lawfully occupied by another and not open to the general public, upon being arrested to leave by

However, penal code section 602(n) does not apply to “persons on the premises who are engaging in activities protected by the United States or California Constitution.”  (See the California appellate case of People v. Medrano (1978) 78 Cal.App.3d 198).  In the recent Los Angeles protests over the presidential election, any charges of criminal trespass potentially can be successfully defended if the protested was protesting on public property and the protest was the lawful exercise of a person’s Constitutional right to free speech and assembly.

To prove someone acted willfully in violating the law, the government need only prove that the accused did the act on purpose or willingly.  The prosecution need not prove that person intended to hurt an officer, gain an advantage or break the law.

In the case of persons lawfully protesting, a resisting arrest attorney would defend charges which would lead to complete dismissal or charges or a finding of not guilty at any potential trial can occur when the defendant can show that the arrest or detention was unlawful.   Specifically, under Penal Code section 148, a police or peace officer is not lawfully performing his or her duties if they are unlawfully detaining or arresting someone or they are using unreasonable or excessive force in performing their duties.

Generally, in order for a detention to be lawful, a peace officer must have reasonable suspicion that a crime has occurred.  Further, for an arrest to be lawful, law enforcement must have probable cause that a crime has been committed.  There is a long line of California and United States Supreme Court constitutional cases describing what constitutes reasonable suspicion or probable cause.   It is always wise to consult a criminal defense lawyer when defending charges arising out of what appears to be lawful protests so that an unnecessary misdemeanor or even felony conviction can be avoided.

Sometimes certain persons can be charged with vandalism during a protest when property is damaged or destroyed.  However, in order for a district attorney to get a criminal conviction for vandalism, the must prove:

In order to prove a defendant acted maliciously a prosecutor must present facts showing that the accused intentionally did a wrongful act or acted with unlawful intent to annoy or injure someone.  When a person is charged with vandalism after lawfully protesting, they should always defend such charges especially if the accused was acting lawfully and not maliciously as defined under the vandalism statute of California Penal Code section 594.

Facing criminal charges after exercising your right to protest, can be stressful but also important not only for your future but for the future of our citizens to object and protest Government activity or rhetoric which harms our citizens and future. As such, in order to properly defend such charges, we recommend that you immediately consult and/or retain a qualified California criminal defense lawyer. Call for a free consultation 844-210-1701